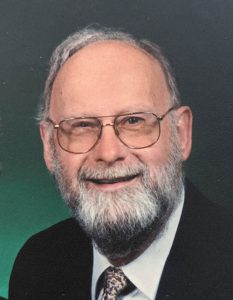 It is with great sadness that we announce that longtime Rotary Club of Forest Grove member Richard W. “Dick” Johnston passed away on August 12, 2020 at the age of 89.

Dick had been a member of the Rotary Club of Forest Grove since 1963 and served as club president in the 2003-04 Rotary year.

A private graveside service will be held on Saturday, August 29, at the Hillside Cemetary in Forest Grove. Full military honors will be under the auspices of the American Legion Washington Post #2 in Forest Grove and the Martin J. Ryan VFW Post #2666 in Hillsboro.

Club members will be emailed a link to be able to attend the service virtually through Facebook Live.

Richard Wesley Johnston was born March 25, 1931 in Portland, Oregon, the son of the late George W. Johnston, Sr., and Doris H. (Voss) Johnston. He was raised and received his education in the Forest Grove community, graduating from Forest Grove High School in 1949. Upon his high school graduation, Dick attended Pacific University in Forest Grove and received a bachelor’s degree in business in 1953.

He was a veteran of the Korean era conflict, having joined the United States Army on April 6, 1953 in Portland, Oregon towards the end of that military action. Dick served for two years, until receiving his honorable discharge on March 16, 1955 in Fort Hamilton, New York, at the rank of Corporal. He received the National Defense Service Medal.

Dick was united in marriage, to Lois E. Williams on June 27, 1953 in the Congregational Church in Atascadero, California. They celebrated their 67th wedding anniversary this past June. Following their marriage they made their home in Morro Bay, California;  Arlington, Virginia; and Livorno, Italy. Following his discharge, they moved to the Forest Grove community where they have resided since.

He worked for the Federal Home Loan Bank as an auditor for several years. Dick later worked for Washington Federal Savings and Loan in Hillsboro and Forest Grove. He was instrumental in opening the Forest Grove Branch. Dick worked for the bank for 20 years, until 1977, when he retired as senior vice president.

Among his special interests, he enjoyed traveling, gardening, reading and collecting antique cars. Dick enjoyed flying and took flying lessons as a young man. His special love was spending time with his family and grandchildren.

Dick was preceded in death by his parents, George and Doris Johnston; his sister, Helen Goldstein and his brother, George Whitfield “Bud” Johnston, Jr.

This entry was posted in General News. Bookmark the permalink.