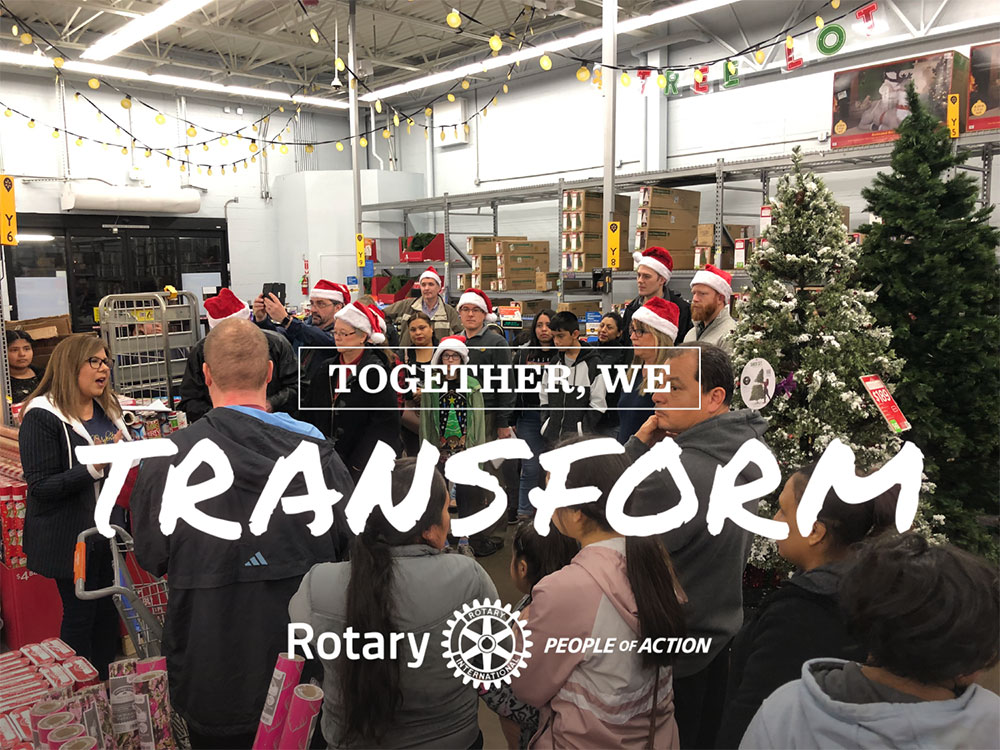 Hope For The Holidays: Our annual Hope For The Holidays project is underway! Our committee is working with school districts, West Tuality Habitat for Humanity and other local groups to identify underprivileged families to help make the holiday season a little brighter.

If you know of a family who might benefit from this program, please fill out the nomination form (sent as an attachment in this week’s Rototeller). Please provide as much information as possible on the family being nominated. Forms should be returned to Claudia Yakos via email, rotaryclaudiayakos@gmail.com, no later than Friday, December 10.

Our shopping night is scheduled for Tuesday, December 14, 6:30 p.m. at Walmart in Cornelius. Information for volunteers for the shopping night will be coming soon.

Attached to this week’s Rototeller is a pledge card for donations to assist us in helping local families over the holidays. You can bring your pledge card in with a check to any club meeting between now and December 8.

Rotary Story Slam: Thank you to our seven club members who entered the Rotary Story Slam. Congratulations to Blake Timm, who was voted by our members as the winner of the club competition! Blake will receive 500 Paul Harris recognition points and will now compete in the regional competition for a chance to receive $500.

Congratulations as well to Lucas Welliver and Bryce Baker who finished second and third, respectively, in the club voting, as well as all of our seven entrants. All seven received 100 Paul Harris recognition points for taking part.

If you haven’t check out the stories, they are all great. Check them out!

Rotaract Update: Thank you to Amy Tracewell, who has stepped forward to become the club liaison to the Pacific University Rotaract Club. Thank you, Amy, for helping us continue to have an important link between our two clubs!

Welcome Hector & Jessica: At our November 17 evening meeting, it was our honor to induct Jessica Lynch and Hector Mendez-Colberg as the newest members of the Rotary Club of Forest Grove!

Jessica is the co-owner of a private optometry practice in Orenco, Vivid Eye Care. A Montana native, Jessica is a graduate of North Dakota State University and the Pacific University College of Optometry. In addition to her practice, Jessica is active on the board of directors of Enfoque Ixcán, a non-profit that provides eye care in Guatemala. Jessica is married with four adult children and loves to cook.

Hector is a process manager with Intel. A native of Puerto Rico, Hector learned about Rotary through his grandfather who was a distinguished member of his local Rotary Club in Añasco. Hector’s grandfather offered the club’s clubhouse for their martial arts classes, which led to an interest in Rotary. He eventually re-established the Interact Club in Añasco and became club president.

Hector graduated from the University of Puerto Rico in 2008 and received his Ph.D. in chemical engineering and materials science from UPR in 2015. He married his wife, Ziara, in 2015 and they have two children, Helena and Gustavo. They moved to Hillsboro to join Intel in 2016. In his spare time, Hector continues to follow his childhood interests of technology, music and science.

Welcome Jessica & Hector. We look forward to serving with you!

Forest Grove Partnering With Lake Oswego On International Project: The Rotary Club of Forest Grove Board of Directors voted to partner with the Rotary Club of Lake Oswego on an international project. Called Project Flourish, the project is based with the MAIA Impact School in Guatemala, which strives to teach girls, and particularly girls of Mayan descent, to finding their empowered voice and to embrace what education can do for them.

Guatemala has the worst gender equity gap in the Americas. This initiative centers on the creation and implementation of an educational program to connect talent with opportunity for first-generation “Girl Pioneers” (young women born into situations of quadruple discrimination as rural, poor, female, and Indigenous) in Guatemala. The elements of this program center on the following:

This project creates a powerful pilot that will serve 42 girls and their families (approximately 336 people). These girls and families represent over a dozen rural villages in Sololá. Once created, the project will continue in perpetuity to serve generations of young women who will break out of poverty.

The project is partially funded through a Rotary International Global Grant. We will have a program on this impactful project later this year.

Online Dues Payments: Our club is now equipped to process dues payments online! We can now process credit card or debit card payments for quarterly dues. Information on how to pay online will be included with quarterly billings that will be coming to your mailbox or email inbox.

With the transition to billing with Quickbooks, some members may not have received their quarterly invoice. If you did not, please contact treasurer Lucas Welliver.

FGHS Community Food Pantry: Our club’s support for the Forest Grove High School Food Pantry continues. Thanks to its partnership with the Oregon Food Bank, food donations are still welcome but are of less need at this time. Of need, however, are toiletries and hygiene products as well as household cleaning materials.

The Food Pantry is open on Mondays from 4-5 p.m. The pantry is now open in its new site in the building along Nichols Lane between the football field and the Basinski Center.

For information on the Food Pantry, please contact Brian Burke, bburke@fgsd.k12.or.us. If you wish to make a cash donation to the pantry, Click Here.

Past Programs: Did you miss a meeting or want to go back and check out a program again? Most of our programs since May 2020 are archived on our club’s YouTube page. Visit https://bit.ly/fgrotaryprograms.

Around District 5100
Save The Date: District 5100 Rotary One Conference: Mark your calendars for May 19-22 as District 5100 will present its first combined Spring Training Event and annual conference in Seaside. The combined conference will provide Rotary training opportunities, inspirational speakers and a celebration of what is hoped to be a great year in District 5100.

Around Rotary International
RI President Shekhar Mehta Urges Countries At COP26 To Protect Mangroves: Rotary International President Shekhar Mehta joined the Rotary delegation to the 26th United Nations climate conference in Glasgow, Scotland, on 10 November to explore ways Rotary can work on environmental challenges, including by restoring mangroves, a crucial ecosystem that can mitigate the effects of climate change in coastal areas.

The climate summit, also known as COP26 (short for Conference of the Parties), brought together nearly 100 heads of state and governments over a two-week period to set new targets for fossil fuel emissions. This was Rotary’s first time at the annual conference.

Mehta co-led a roundtable discussion with Patricia Scotland, secretary-general of the Commonwealth, that focused on the critical role mangroves play in mitigating and adapting to climate change. Mangroves sequester large amounts of carbon and also protect against storm surges and coastal erosion, filter pollutants, and provide habitat for aquatic life, among other benefits.

“The sea is washing away coastlines because mangroves have gone,” said Mehta. “We are losing our ecosystem. Once mangroves die, our marine system and coastal communities will be lost.”

Climate and environmental representatives and experts from more than 20 countries attended the round table and pledged to act alongside Rotary to help save and restore mangroves.

The members of Rotary’s delegation to COP26 were Judith Diment, dean of the Rotary Representative Network, which comprises 32 unofficial ambassadors to the UN and other international organizations; Doug Wills, Rotary representative to the Commonwealth; Karen Kendrick-Hands, who attended on behalf of the Environmental Sustainability Rotary Action Group; and John MacPherson and Tariq Durrani, who helped organize a competition for schoolchildren in the UK to create posters for display at the conference.

Over the past five years, The Rotary Foundation has committed more than $18 million toward projects that support sustainable, community-based environmental projects. On 1 July, the Foundation began accepting applications for global grants that support the environment, which was added as an area of focus in 2020. Potential projects include using renewable energy to combat environmental degradation, growing food sustainably, and protecting water sources.

At last week’s meeting, we were honored to be joined via Zoom by Tim Tran. The former chief financial officer of Johnstone Supply and a member of the board of trustees at Pacific University, Tim shared his story of escaping Vietnam and building a successful life in the United States. The story is document in his biographical book, American Dreamer.

Born and raised in Vietnam, Tim’s father ran away from home at the age of 17 to fight for Vietnam’s independence under Ho Chi Minh. After a few years with the resistance, his father realized that the movement was using nationalism to hide their communist ideology.

When the Geneva Agreement divided Vietnam into north and south in 1954, Tim escaped with his family into the south Saigon. Tim was the oldest of three children with two sisters.

In 1970, Tim received a scholarship through USAID to attend college in the United States. He was sent to Pacific University where he met his future wife, Cathy. Tim eventually transferred to the University of California at Berkeley because he felt that his existence at Pacific was too comfortable.

After graduating, Tim returned to Vietnam as one of the conditions of his scholarship and began work for Shell Vietnam. During that time, Tim took on considerable stress because he had studied in the United States. He at one point was accused of being a spy for the CIA, with the government citing a magazine from his office with the title CIA as evidence. (In this case, CIA stood for Certified Internal Auditor.)

In 1979, Tim and his wife and brothers managed to escape in a small boat across the Gulf of Thailand to a United National refugee camp in Malaysia. During their escape, the boat was boarded and robbed four times. While there was not much of value, thieves stole Tim’s Levis jeans and his glasses.

After four months in the refugee camp, Tim and Cathy arrived in Portland where he eventually landed a low-level job with Johnstone Supply. He eventually rose his way through the ranks to become the company’s chief financial officer. He retired in 2003.

We encourage you to take in the whole video presentation and also read Tim’s book, American Dreamer. Learn more at timtranamericandreamer.com.

Fri., Dec. 10: Hope For The Holidays Applications Due

This entry was posted in Rotary Rewind. Bookmark the permalink.