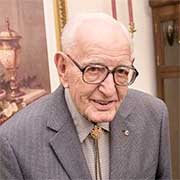 A memorial service for George will take place on Fri., Mar. 4, 11 a.m., at the Forest Grove United Church of Christ.

GEORGE WALTER HORNER was born September 10, 1920 on the family farm in Dodge, Oregon, eight miles southeast of Estacada, Oregon. He was the third son of the late Frederick Horner and Ethel (Keller) Horner. George was a graduate of the Estacada High School Class of 1939. He had the muscle and grades to get a football scholarship to Pacific University as a leather helmeted offensive lineman.

His mother, Ethel Keller came to Oregon from the Midwest in about 1905. The Keller farm was about two miles from the Horner farm. George was named after his grandfather, George Keller. George’s father, Fred Horner came from the north of England in 1907. In the party coming to Oregon where Fred’s father, David and two younger brothers and Fred’s mother who passed away soon after their arrival in Oregon.

Music was an important part of the life of the Horner family. Fred’s father had conducted a church chorus in England, now Fred had a fine baritone voice, sang in a very fine group the Summer Scales choir and won the Summer Scales competition in 1906 as the best baritone voice in the country and the north of England. So it was easy to see George’s mother, Ethel who could play the piano for Fred and the brothers played instruments in high school and Howard won the solo for the best bass horn player in Oregon. Brother, David also played in high school, as did George. George Played the trombone in high school, Pacific University and several navy marching bands.

It was easy to see that the war was coming, so George entered Pacific University in 1941 as a math major. He also met Jean Gordon from Portland their freshman year. George and Jean became great friends. Jean graduated from Pacific in physical education and later earned a Master’s in PE and was hired at Pacific to teach women’s PE and swimming water safety. Jean taught at Pacific while George was overseas. George was united in marriage to Jean Gordon on August 6, 1944 in San Francisco, California, before George went overseas.

He joined the United States Navy on June 2, 1942. George served as a deck division officer, first division aboard the USS Yancey, aka 93. The Yancey had a crew of 495 men and officers was 498 feet long, carried 8 50 foot landing craft, and 16 30 foot landing craft. George was trained to operate these landing craft and whenever the situation was set 1A George would go with the landing craft over the side. He was also trained to stand General Quarters (GQ) on the bridge, Officer of the Deck (OD) underway and in port. Yes, George stated “we saw some serious war on Iwo Jima and Okinawa we had a loss of 118, 000 young men. It was a load and deliver and invade and go load again.”

The Yancey and George ended the war in Japan and watched the ending ceremony on the big battleship the USS Missouri. George served for four years, until receiving his honorable discharge on April 30, 1946, at the rank of Lieutenant First Class. He had received the American Theatre Ribbon, the Asiatic Pacific Theatre Ribbon-2 stars, the Philippine Liberation Ribbon and the World War II Victory Medal.

Later, George was hired at Pacific to manage programs, coach sports, raise funds and build the buildings. “It was also great with Jean, because we were both working at Pacific. Then we had a timeout. Douglas and David were born, What great young men! We had the building of a home with a pool for Jean, then about 25 years of raising and showing Suffolk draft horses. George loved singing in the Rythmaires Quartet for 28 years. The barbershop contest shows and the quartet was Ace Hingston, the tenor, Ralph Shumm, lead Bill Wright, baritone, and I sang bass, what a great group!” Also George had great memories of singing with the Forest Grove Gleemen (now known as the Westside Singers) and the UCC Choir.

George was preceded in death by his parents, Frederick and Ethel Horner and his two brothers, David Horner and Howard Horner.

Survivors include his two sons and daughters-in-law, Dr. Douglas and Donna Horner, of Unionville, Indiana and David and Cheryl Horner, of Pueblo West, Colorado.

The family suggests that remembrances may be contributions to the Forest Grove United Church of Christ Memorial Fund, 2032 College Way, Forest Grove, Oregon 97116, in his memory.

This entry was posted in Uncategorized. Bookmark the permalink.