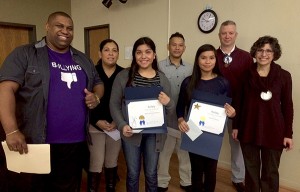 The Rotary Club of Forest Grove named two students from the Forest Grove School District as their Youth Citizens of the Month for January.

Mayra, a senior, has played soccer all four years of high school. She has earned a varsity letter as the team’s goalkeeper and has won Athlete of the Week in The Oregonian as well as winning the school’s Athlete of the Month three times over four years.

She is also involved in student body leadership, and helped organize the twice yearly school blood drive. She serves as vice president of the Sparrow Club, which helps support students and community members in need. She was selected for Homecoming Court this fall.

“Mayra is a charismatic, dedicated, cheerful, outgoing, and athletic young woman who is always there for people who need her,” her nomination form read.

Cat serves as a “new student greeter” who helps new students transition to Neil Armstrong. She also stands out in her extracurricular activities, where she was one of only two girls on the eighth grade football team.

She also excels in the classroom and serves as an example to other students. When her language arts class goes to the library, her teacher wrote, Cat starts checking out books for her classmates, which she learned to do in her position as a library aide.

“Catherine is one of the most caring students in my class,” wrote teacher Bonnie Wenzl on the nomination form. “She always helps others without being asked. She is positive in all that she does and she works very hard in class. She has a solid sense of integrity.”

Both students were recognized at the noon Rotary Club’s Jan. 20 meeting. They each received an award certificate and a $25 gift certificate to Frye’s Action Athletics.

Nominated by teachers and administrators, and rotated monthly between Forest Grove, Banks and Gaston high schools, the Rotary Club of Forest Grove Youth Citizen of the Month program recognizes students who possess high standards of personal behavior and good citizenship, exemplify the ideals of Rotary, follow school rules and and have excellent behavioral records.

This entry was posted in Uncategorized. Bookmark the permalink.